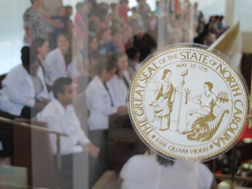 Legislation that impacts every nurse in the state has made it to Governor Roy Cooper’s desk, after clearing the Senate last night by a vote of 45-0, right before lawmakers are scheduled to end their 2017 session.

House Bill 550, "Establish New Nurse Licensure Compact," was introduced by Rep. John Szoka (whose wife is an NP) with advice from the North Carolina Board of Nursing in order to make North Carolina a member state in the enhanced nurse licensure compact. It was co-sponsored by all three NCNA members in the State House: Rep. Gale Adcock, Rep. Carla Cunningham, and Rep. Donna White.

NCNA endorsed HB 550 before the session started in January, and it looked like it was going to breeze through the legislature after passing the House by a vote of 116-0. As high-profile issues like the budget dominated discussions, however, the bill sat in place in the Senate. With the window closing, NCNA’s lobbyists worked hard to impress upon lawmakers the importance that this legislation pass in 2017.

Had HB 550 not passed, some 18,000 nurses working in North Carolina but licensed elsewhere would have been in jeopardy of losing their ability to practice in this state. Additionally, joining the new Nurse Licensure Compact allows North Carolina to remain a player in the multi-state licensing process, and it will establish our place in the Interstate Commission of Nurse Licensure Compact Administrators. The enhanced compact is designed to take effect when 26 states have signed on; depending on when Gov. Cooper signs HB 550 into law, we will be either the 25th or 26th state to do so.

This bill may not seem as exciting as some of the other healthcare reforms being considered, but it is absolutely vital for the nursing profession in North Carolina. The strength and diligence of your NCNA ensured that HB 550 passed, and we thank all of you for continuing to support your professional organization as we lead Nursing Forward® together.