NCNA President Mary Graff has had a Letter to the Editor published in the Triangle Business Journal discussing the Modernize Nursing Practice Act.

For those of you without a subscription, here is a transcript: 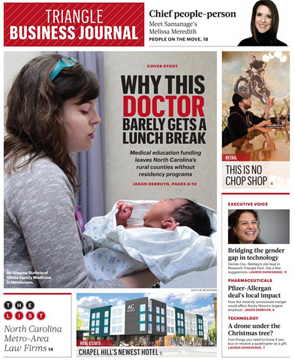 “Your Nov. 27 cover story on the need for rural physicians highlighted some incredibly important concerns about access to quality health care in North Carolina’s rural areas.

This is a vital issue for the state, and one that needs to be addressed.

The physicians quoted in the article raised good points: I would love to see some of their suggested improvements to the state’s residency programs enacted. It struck me, however, that the only solutions presented in the article require more money.

One has to wonder if getting enough increased funding from the state is a realistic goal?

And even if that money does start flowing, everyone interviewed in the article acknowledges that it would take years to make any sort of impact.

The good news for rural North Carolinians is that help could be on the way in the very near future — and it would not cost taxpayers a cent. A shovel-ready bill called The Modernize Nursing Practice Act is working its way through the General Assembly, and it would eliminate superfluous red tape that currently prevents Advanced Practice Registered Nurses (APRNs) from providing some of this much-needed care.

APRNs are some of the most highly trained professionals in all of health care, and they are ready and willing to open practices in the same rural areas that physicians have been struggling to adequately cover on their own. The Institute of Medicine has advocated for these improvements for years. U.S. Sen. Thom Tillis, R-N.C., even co-sponsored a bill just last month at the federal level to enact these same changes at Veteran Affairs facilities.

Study after study has shown that APRNs provide care within their scope of practice that is as good as – or even better than – the same care that sometimes overlaps with physicians. APRNs can alleviate the shortages that North Carolina desperately needs to reign in, and they can do it while saving the state more than $400 million per year, according to a Duke University study released earlier this year.

This issue requires a multi-faceted approach. Obviously, APRNs are not the only answer – we need more providers across the entire spectrum – but this is not an either/or situation. It is time for North Carolina to take nursing forward.